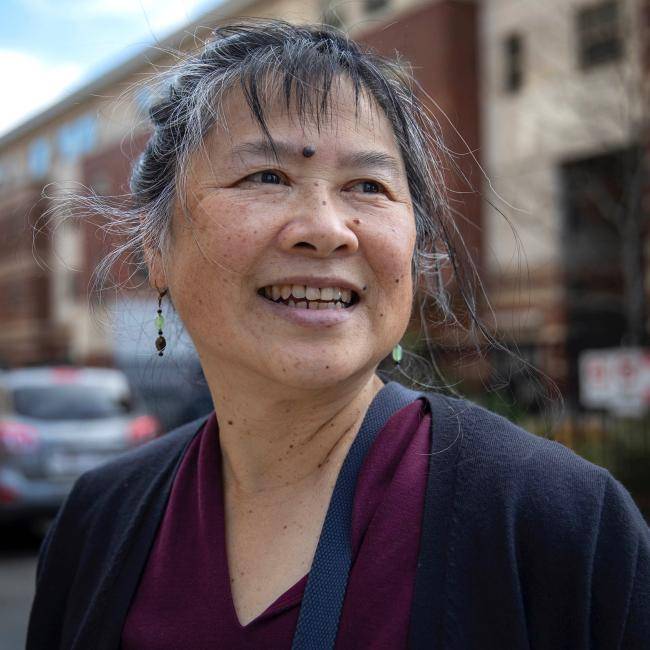 The Boston Preservation Alliance is pleased to present our 2022 Codman Award for Lifetime Achievement to Lydia Lowe, whose work has reflected her determination on serving the public and preserving cultural identity of Boston’s Chinatown—the only surviving historic ethnic Chinese enclave in New England.

Lydia Lowe is the Executive Director of the Chinatown Community Land Trust, a non-profit, community-based organization that ensures community stewardship of Chinatown land. She has spent 35 years organizing for civil rights, worker rights, preservation of affordable housing, and community empowerment in Boston’s Chinatown. Recently, she has initiated efforts to preserve Chinatown’s historic 19th-century brick row houses as permanently affordable housing, to create a Row House Protection Area in the neighborhood zoning code, to develop an Immigrant History Trail as a public place-keeping project, and to designate Chinatown as both a Historic and a Cultural District whose character is defined as an anchor for immigrant working class families. She serves on the Community Advisory Board of UMass/Boston’s Institute for Asian American Studies, the Friends of the Chinatown Library, and the Governor’s Environmental Justice Council.

Before becoming the Executive Director of the Chinatown CLT, Lydia served for 30 years as the Executive Director of the Chinese Progressive Association. She provided a platform for Chinatown residents to organize a voice in the neighborhood, preserved more than 1,000 units of subsidized housing, secured public parcels for community development, and won bilingual ballots for Chinese and Vietnamese voters in Boston. Lydia is a co-founder of the Chinatown Master Plan Committee, Asian and Pacific Islanders Civic Action Network (APIs CAN!), the Homes for All campaign, Chinese Progressive Political Action, and Right to the City VOTE! She serves on the Mayor’s Housing Advisory Committee, the Community Advisory Board of UMass/Boston’s Institute for Asian American Studies, the Friends of the Chinatown Library, and the Governor’s Environmental Justice Council. She is a former Barr Fellow and a Distinguished Fellow at the Center for Women in Politics and Public Policy.

“Lydia’s leadership and advocacy are inspirational. Her passion and determination for improving the community are to the benefit of us all,” says Alison Frazee, Executive Director of the Boston Preservation Alliance. “Lydia understands that preserving affordability, walkability, jobs, and culture are all part of historic preservation. Saving buildings is just the beginning—we also need to preserve the livability of the community that makes neighborhoods like Chinatown so unique. The Alliance is honored to celebrate Lydia’s work throughout her career and support ongoing preservation efforts in Chinatown.”

Join us to celebrate Lydia Lowe on the evening of Thursday, October 20, 2022, at Garage B at the Charles River Speedway! If you or your company would like to sponsor this event, contact Kali Noble at knoble@bostonpreservation.org.