The statue known as The Emancipation Group was a gift to the city from a local politician named Moses Kimball, installed in 1879. The piece is a replica of a statue in Washington D.C. created by Thomas Ball. The bronze statue depicts Abraham Lincoln standing over the crouched figure of the formally enslaved man Archer Alexander who assisted the Union Army, escaping slavery, only to be recaptured by the Fugitive Slave Act. The inscription on the podium reads, “A race set free/and the country at peace/Lincoln/rests from his labors.” Controversial since the day it was erected, The Emancipation Group has often been criticized for its arrangement of a kneeling Black man and Lincoln in a dominant position, suggesting he was the sole savior of Black enslaved individuals and belittling the role Black people played in achieving their freedom. In 2020, a local artist named Tory Bullock collected over 12,000 signatures calling for the statue’s removal. The Boston Art Commission held public meetings and circulated a survey for feedback which resulted in a unanimous vote to remove the bronze statue. A subcommittee was formed to make recommendations for the future of the art piece which was removed from the site in December 2020.

The Alliance participated in the Boston Art Commission’s public meetings, speaking in favor of relocating the statue to a place where it can be interpreted and provide education about Boston’s racist past. Alliance Executive Director serves on the Commission’s subcommittee to make thoughtful recommendations for the statue’s future.

The Boston Art Commission subcommittee meets again. The art piece has been removed and a conditions assessment is complete. There was a request for a robust analysis of the full history of the sculpture and and the pedestal and surrounds. Conversations are ongoing with several museums outside of Boston. Alliance Executive Director Greg Galer asks about the focus on museums and in general outside of Boston. He also asks for clarification of the Commission’s vote. (It includes “recontextualizing the existing statue in a new publicly accessible setting”). He questions why we wouldn’t use the piece as an opportunity to teach about our local history of racism, noting the power of objects to lead important questions, debate, and learning. Galer suggests finding a large outdoor space, like Franklin Park, for relocation of the statue where visitors could choose whether or not to see the statue and where there would be ample room for robust interpretation. While some others on committee raise the same questions, most others feel the piece should be inside of a museum or library with adequate interpretation. Some feel most appropriate would be in storage only accessible by appointment. The Committee Chair agrees to reach out to other museums in Boston and Massachusetts to explore interest. The Committee found the idea of a traveling exhibit with the sculpture of interest. There was also discussion on what would replace the bronze sculpture on the pedestal.

The art piece is removed from the site. Images below.

The Boston Art Commission subcommittee meets to discuss next steps for the art piece such as finding a new public space for it with less visibility, a museum to better interpret the piece, or some other location. Alliance Executive Director Greg Galer serves on this committee.

The Boston Art Commission held a public meeting to hear testimony about the future of the Emancipation Group after it is removed from its current location.

The Boston Art Commission held a second public meeting to hear testimony about the statue. At the end of the meeting, members of the Commission voted unanimously to remove the statue from its current location in Park Square pending:

The Boston Art Commission held a public meeting to hear testimony to shape the Commission’s future deliberations about the statue.

The Alliance’s Statement on Monuments and Memorials

Statement from the National Trust

The Boston Sun, “Rushing: Keep ‘Emancipation’ Statue with Lincoln in Back Bay”

Raul Fernandez, “A monument to white supremacy stands uncontested in our own back yard” 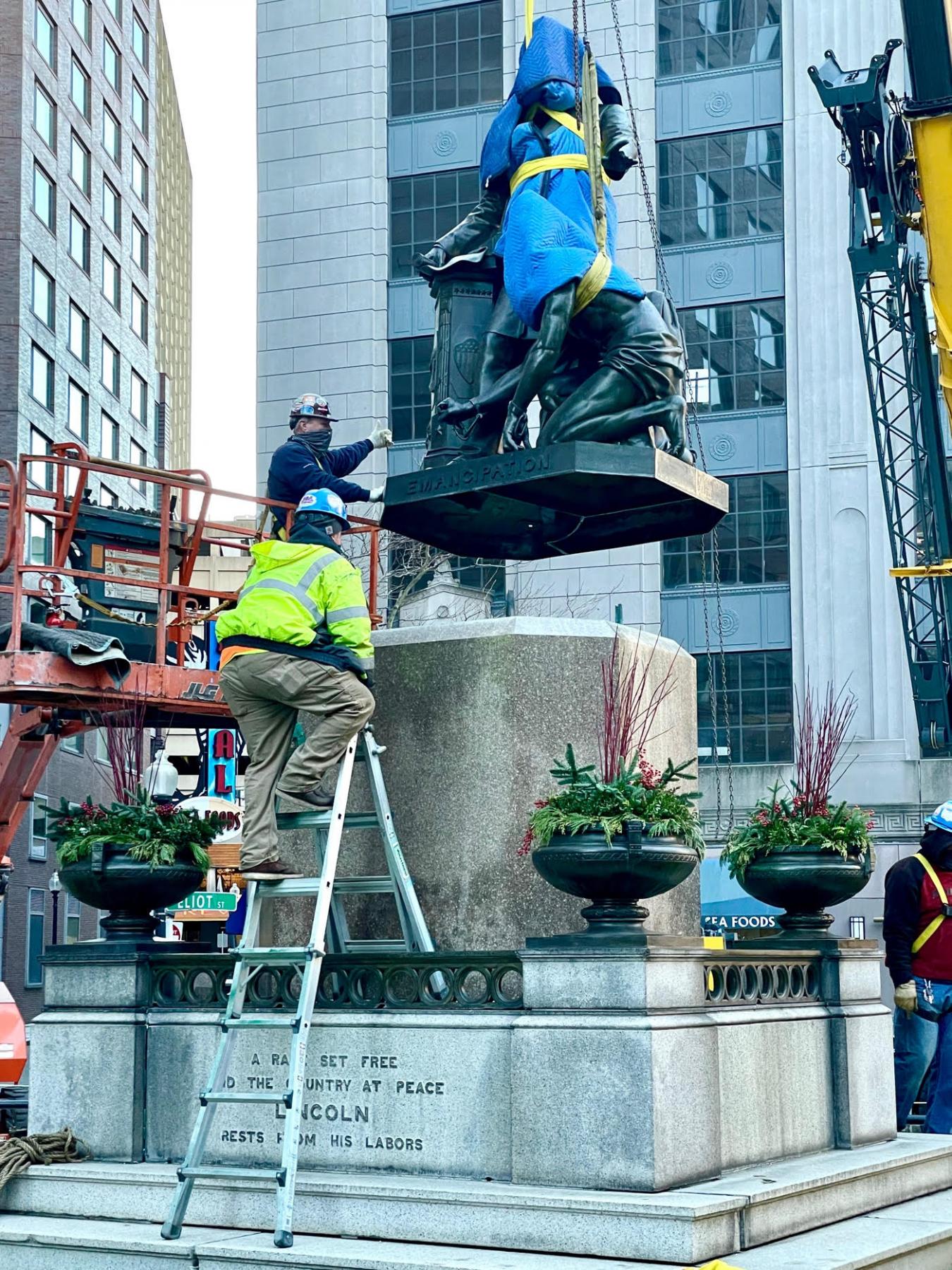 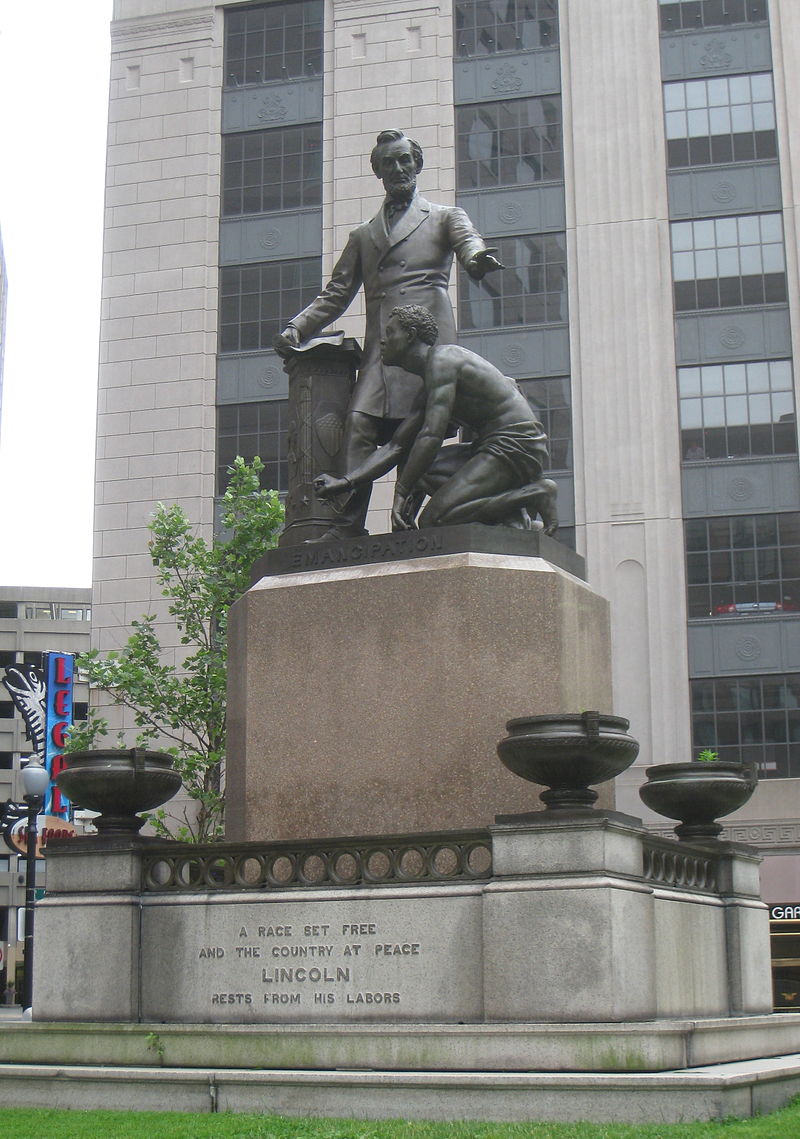 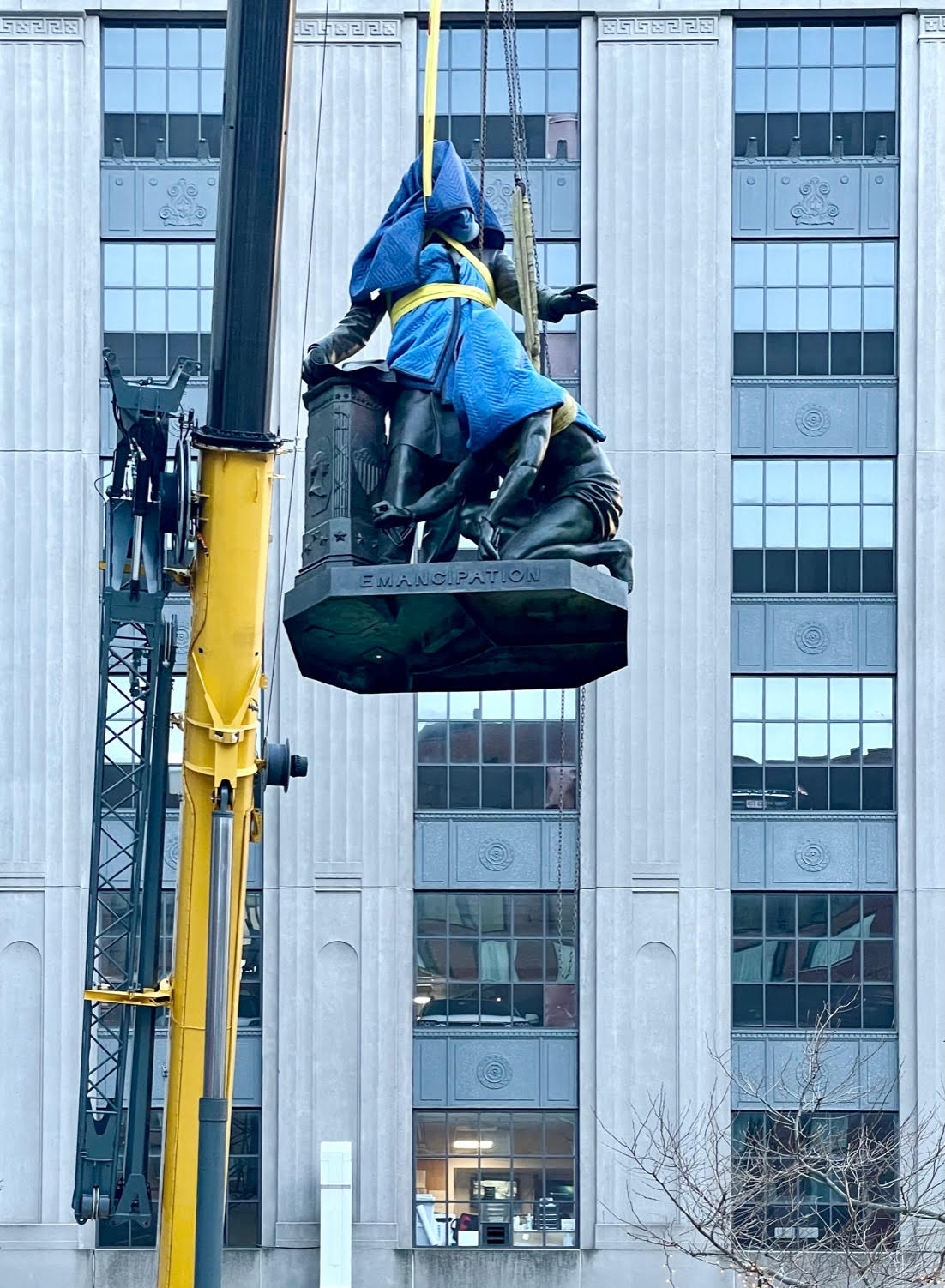 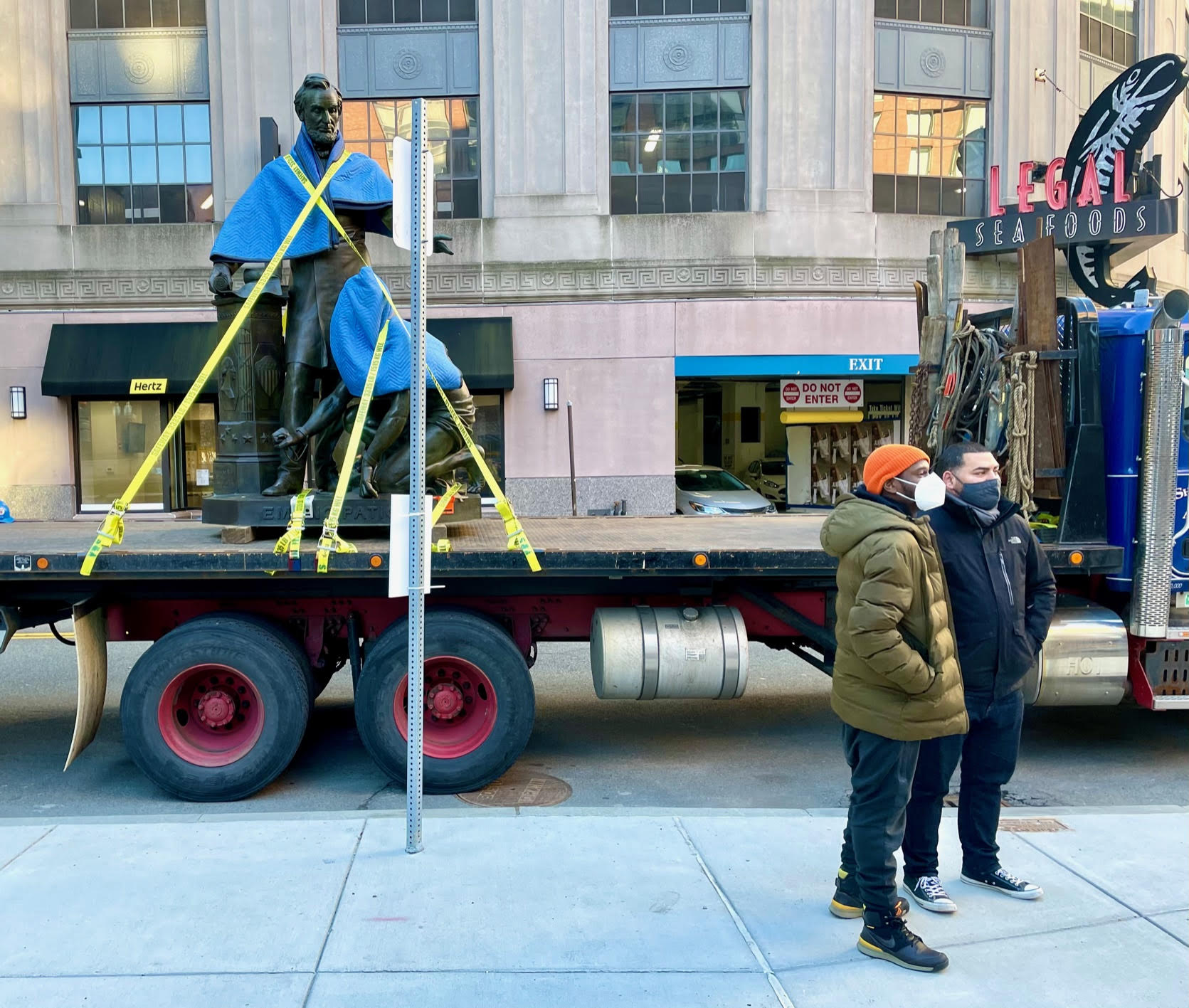 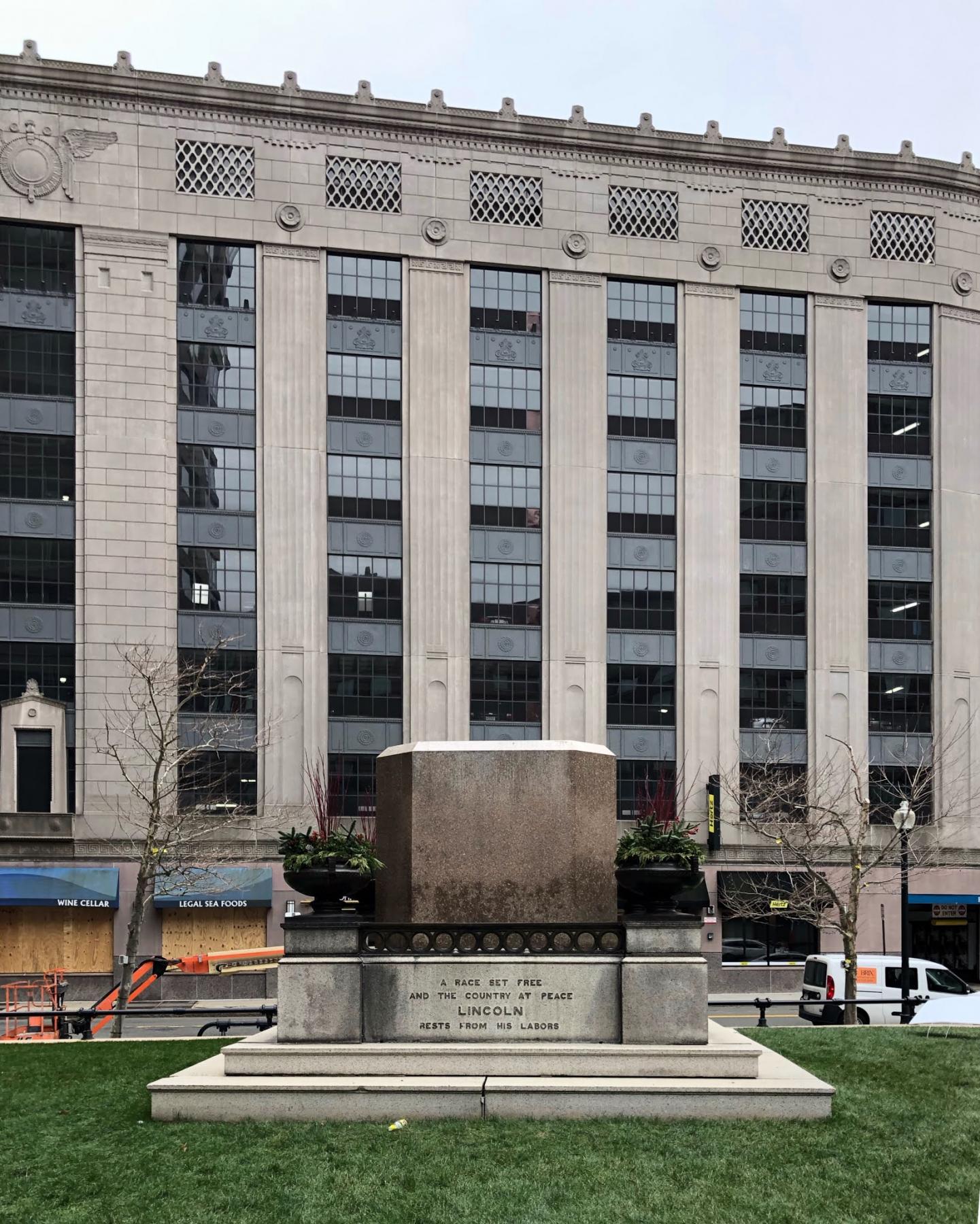 Former location of the Emancipation Group. photo credit: Matthew Dickey
Thank you to all our corporate members, including: