The 34 islands that make up the Boston Harbor Islands National Recreation Area are home to beautiful nature and historic sites. The area is made up of a collection of islands, one former island, and a peninsula. Twenty-two of the islands are part of the Boston Harbor Islands Archaeological District. The following islands, except Graves Island, are accessible by ferry.

Bumpkin Island
Originally inhabited by Native American tribes, Bumpkin Island was leased to tenant farmers while the country was under British rule. The primary businesses on the island were related to fishing – in the early nineteenth century, the island hosted a fish-drying operation and fish-smelting operation in the twentieth century. Perhaps the most significant use of the island was Boston philanthropist Albert Barrage’s hospital for children with physical disabilities, founded in 1900. The hospital was converted into a ward for polio patients in 1940 and burned down in 1945. During World War II, the island was converted into a US Naval Training Camp, which was dismantled after the war ended. Bumpkin Island is relatively small, measuring 62 acres. Visitors today will see the remains of the hospital and naval training camp; the island is also a current camping destination.

Georges Island
Georges Island sits only 7 miles away from Boston. Among its 53 acres is Fort Warren, which was dedicated in 1847 and constructed of stone and granite. During its operation, it protected the Boston Harbor and functioned as a prison during the Civil War for Confederate officers. Fort Warren disbanded in 1947 and became a National Historic Landmark in 1970. A cenotaph commemorating the Confederate officers who died at Fort Warren existed on the island from 1963 until October of 2017. Today, visitors can walk around the historic Fort Warren.

Grape Island
Part of the territory of Weymouth, Massachusetts, Grape Island has 101 acres that hold rocky beaches, wild berries, wooded trails and campsites, and two freshwater springs. The British troops raided Grape Island in 1775 during the siege of Boston, which marked the beginning period of the American Revolutionary War.

Graves Island
The Graves are a dangerous group of rocks which were named by Governor Winthrop in 1653 after Rear Admiral Thomas Graves, who brought settlers from England to Boston. They are located about nine miles off the coast of Boston and since 1905, have been home to the Graves Light and Fog Signal Station. Construction was started on the lighthouse in 1903 by the architect Royal Luther so that ships would avoid The Graves and find the Broad Sound Channel, which was dredged in 1903 to allow for the passage of larger ships. Construction was completed under budget and on-time in 1905 for the US Lighthouse Service with enough leftover material to build an oil house as well. Graves Light won a Preservation Prize in 2020.

Little Brewster Island
Little Brewster Island is best known as the home of Boston Light, the United States’ oldest continuously active lighthouse site, dating back to 1716. The lighthouse was originally financed by a tax on all boats entering and leaving Boston Harbor and was gravely damaged by the British evacuation of Boston at the end of the Revolutionary War. Rebuilt in 1783, the lighthouse’s tower was raised 14 feet to its current height of 102 feet over sea level in 1859. Its light is now visible 27 miles out into the Atlantic Ocean. Boston Light is a National Historic Landmark with Coast Guard staff maintaining the lighthouse. Visitors can take a tour of the island and its lighthouse on a two-hour cruise narrated by National Park Service and Coast Guard staff. Boston Light is one of Boston’s oldest buildings and is featured in City Archeologist, Joe Bagley’s book, Boston’s Oldest Building’s and Where to Find Them.

Lovells Island
The 61 acres of Lovells Island hold trails, pine woods, and a rocky beach. Visitors can explore these areas, camp, and see Fort Standish, which was built in 1907 and served as a defensive fort similar to Fort Warren on Georges Island. Fort Standish became part of the Boston Harbor Islands National Recreation Area in 1962.

Peddocks Island
Occupied by farmers since 1634, Peddocks Island is one of the largest Boston Harbor Islands with the longest shoreline. Due to its proximity to mainland Boston, the island has enjoyed a prominent military role, with 600 patriot militiamen stationed there in 1776. Fort Andrews, built on the island in 1904 as part of the Harbor Defenses of Boston, was active until the end of World War II. The island is composed of four headlands – a narrow piece of coastline that projects from the shore into the sea – connected by sand or gravel bars. At low tide, the island measures a vast 288 acres. Peddocks Island is the most topographically and environmentally diverse harbor island with pier and hiking trails near a pond, a marsh, and coastal forests available for visitors. Historic structures, namely Fort Andrews and the related World War II-era Chapel, are available for visitors to access. Scenes of Martin Scorsese’s Shutter Island were filmed on Peddocks Island.

Spectacle Island
Spectacle Island has been the home to many varied operations, including a quarantine hospital, farmlands, resort hotels, and a glue factory. Currently, the island is extremely visitor-friendly, with a marina, visitor center, café, swimming beach, and walking trails. The island also features a 157-foot-tall hill called North Drumlin that provides panoramic views of its terrain, the harbor, and the city of Boston.

Thompson Island
Thompson Island sits only 1 mile away from Boston and is owned by the Thompson Island Outward Bound Education Center, which is a non-profit organization dedicated to the education of thousands of Boston public middle school students. In 1835, the Boston Asylum and Farm School for Indigent Boys was established on Thompson Island. In 1955, the school then became a boarding school called Thompson Academy and educated young boys from the Boston area until it closed in 1975. A conservation restriction was bought by the National Park Service and the Massachusetts Department of Environmental Management in 2002, which has assured the protection of the island and public access to the island. The Island consists of 170 acres with pear and apple orchards, meadows, and marine wetlands. It is accessible to visitors on weekends during the summer months. 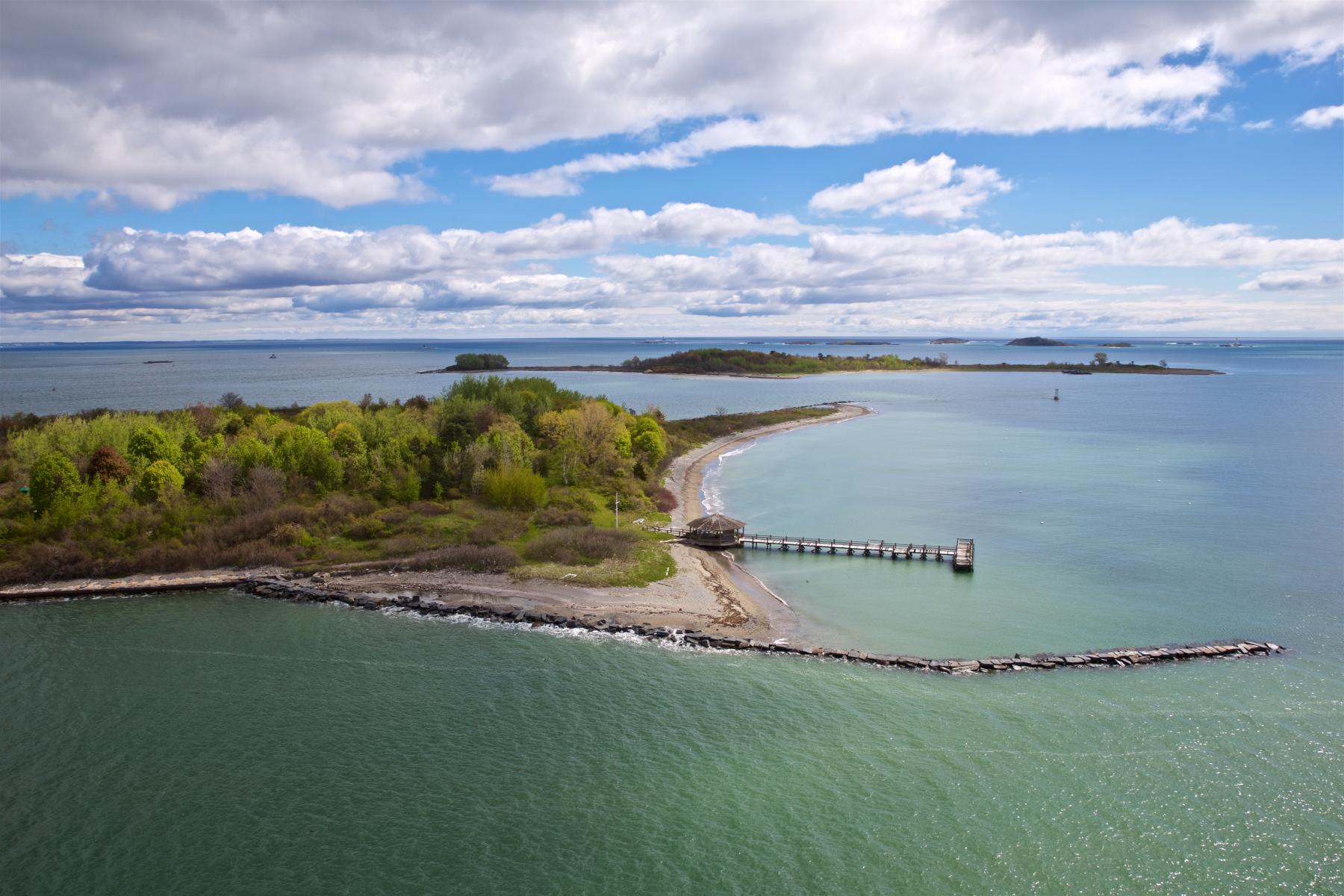 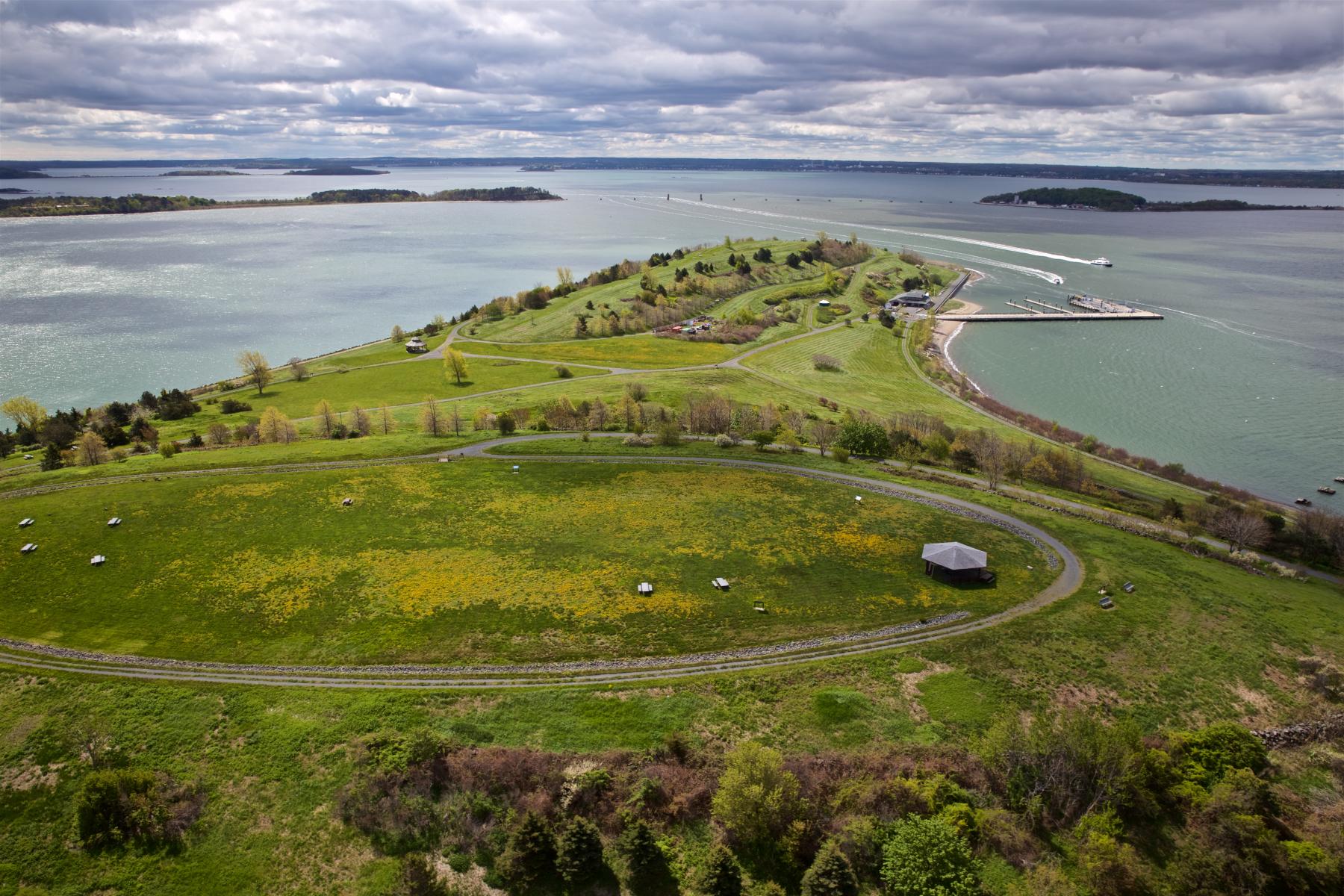 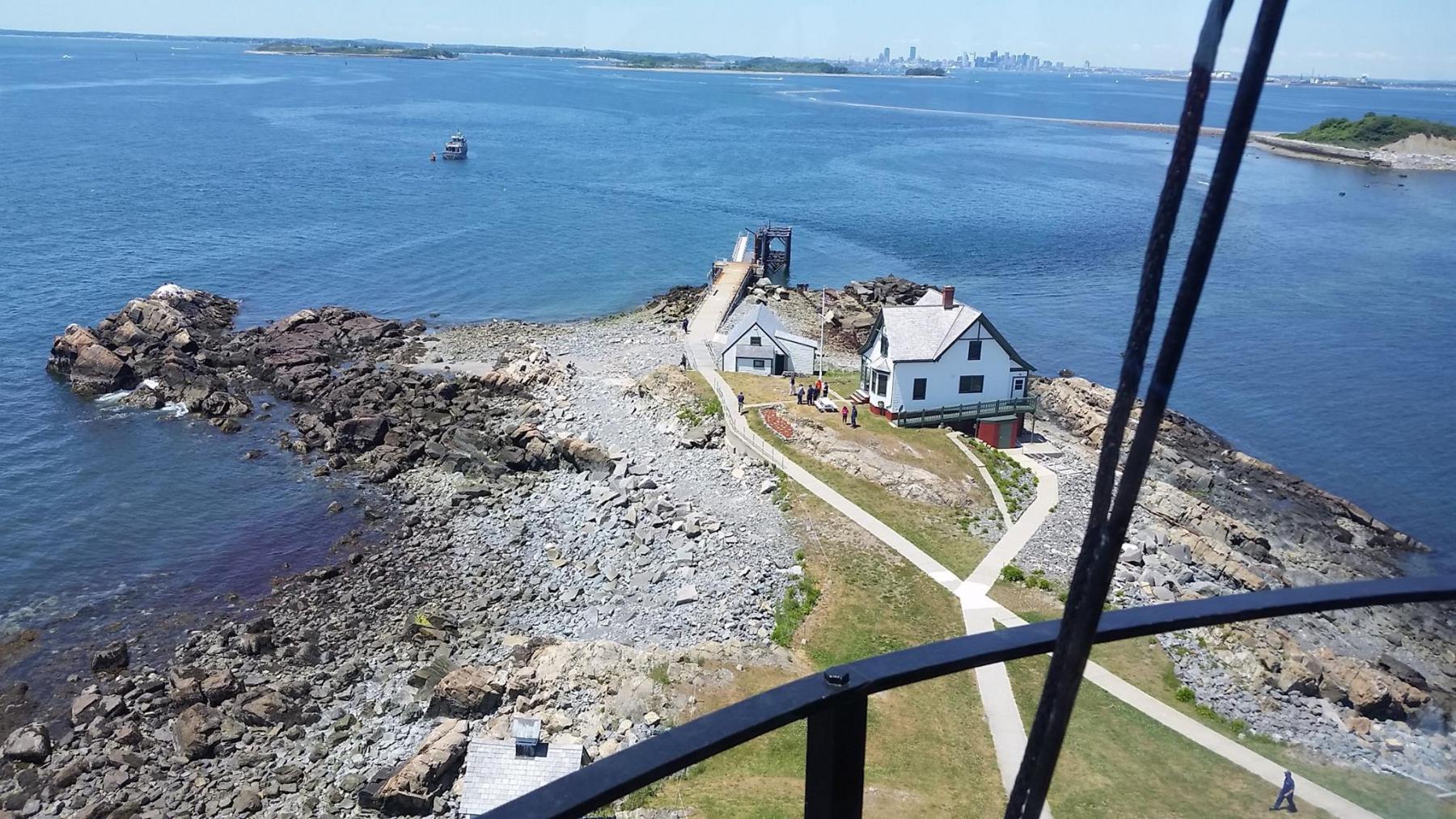 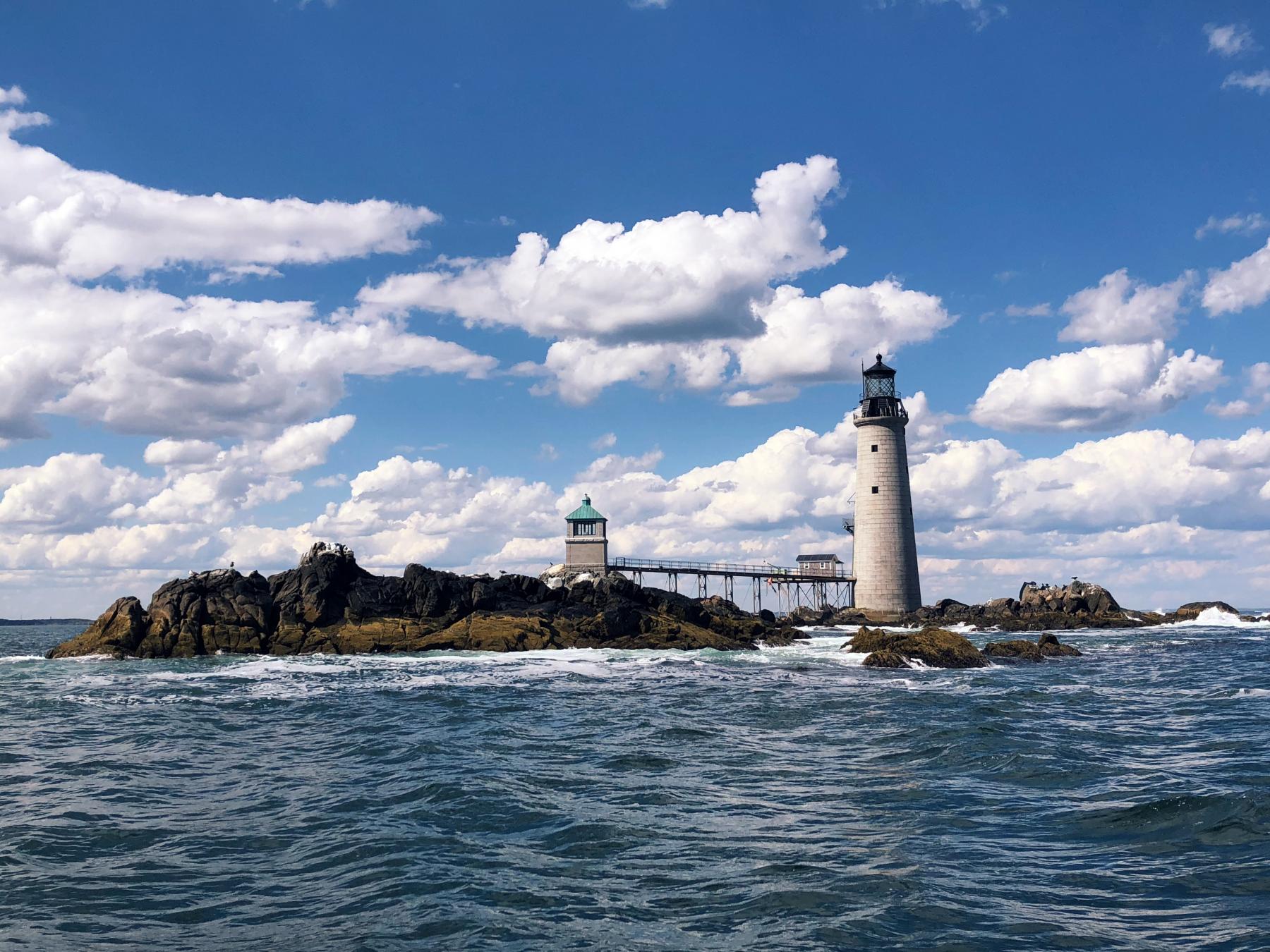 The Graves. Photo by Matthew Dickey.
Thank you to all our corporate members, including: