Literally surrounded by history, North Square has been listed on the National Register of Historic Places since 1961, greeting visitors to the North End with historic charm. Thoughtful interventions and inspired art pieces enhance this welcoming open space and show the power of public art.

North Square in the North End has always been surrounded by history. It was the site of the original Old North Meeting House and home of Increase Mather, the head of Harvard College and pastor of the church, until the great fire in 1676. The home of Paul Revere, built in 1680, sits on one side, and on the other previously stood the home of Lieutenant Governor Thomas Hutchinson which was destroyed by a mob in 1765, once stood just up the street on Garden Court. The square has been a part of the Freedom Trail since the 1950s and was added to the National Register of Historic Places in 1961, officially marking its significance.

This restoration project was commissioned by the City of Boston to make the square an accessible focal point of the area that would better serve residents and tourists. To do this, the frequent traffic was diverted to create more opportunity for pedestrian use, and four new sculptures were added showing what the surrounding area would have looked like historically, the viewer’s relative location to other Bostonian landmarks, an interactive nautical-themed sculpture, and the past celebrations that occurred in the square. The existing 19th-century gas lamps were restored with new glass and burners, and cobblestones were extracted, cleaned, and reconfigured in the new layout. The chain that circled the square, while never used on the USS Constitution, is an example of a construction style developed in the Charlestown Navy Yard. It was refurbished and reinstalled with sections open to allow greater accessibility. The team overcame challenges such as re-carving the inlay marking the Freedom Trail in the historic granite sidewalks and working around a complex patchwork of underground utilities and vaults of surrounding buildings. North Square is a successful example of placemaking in a dense, historic urban core.

“It’s easy to forget, in a city so dense with significant historic buildings, that open spaces are also an integral part of Boston’s historic character, particularly those relatively small ones hidden within dense urban neighborhoods. The City’s efforts to update North Square demonstrate the centrality of squares to the community and to our understanding of the interrelationship of urban fabric today and historically. They provide powerful places for respite, reflection, and gathering that continue to be an essential part of city life,” says Greg Galer, Executive Director of the Boston Preservation Alliance. 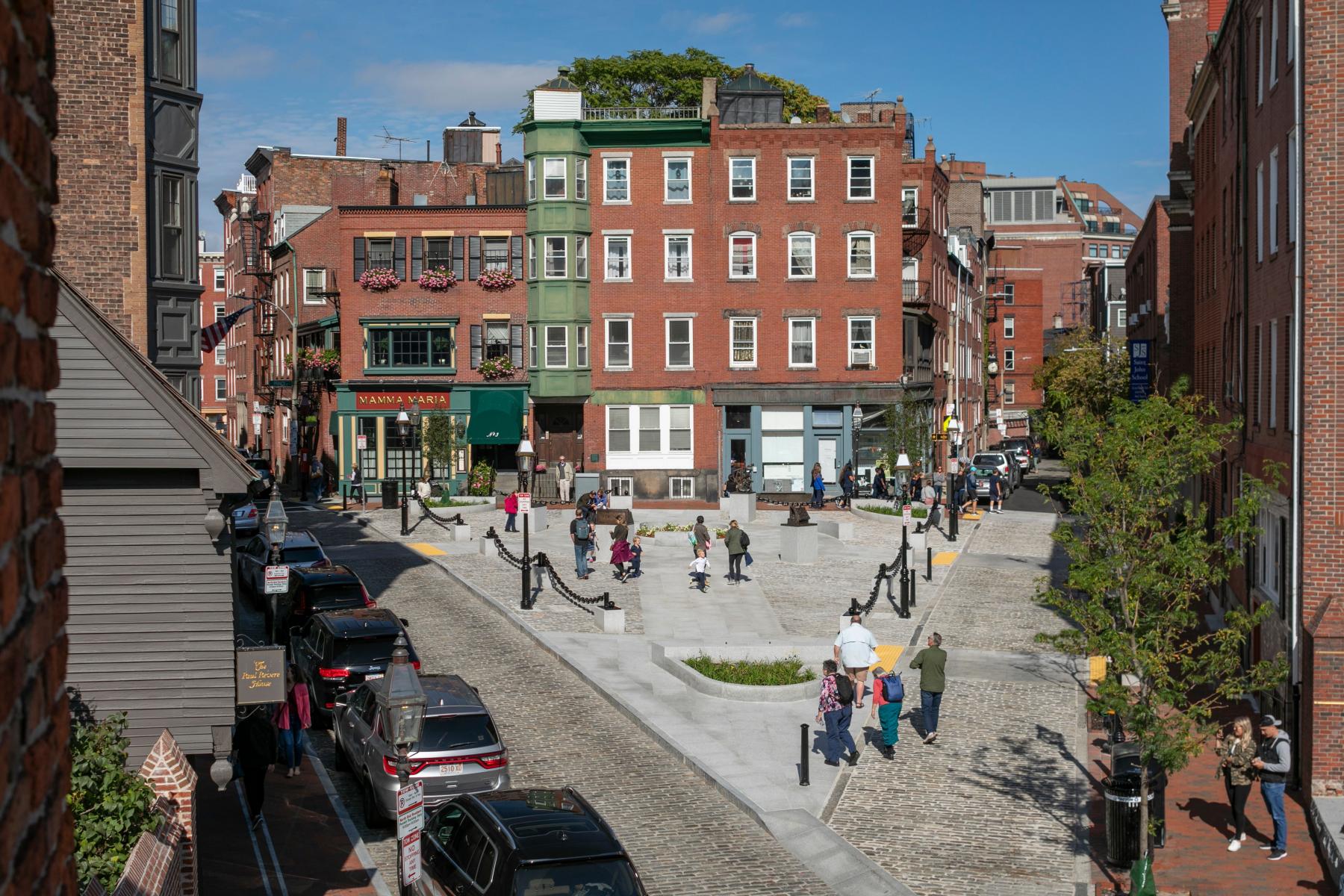 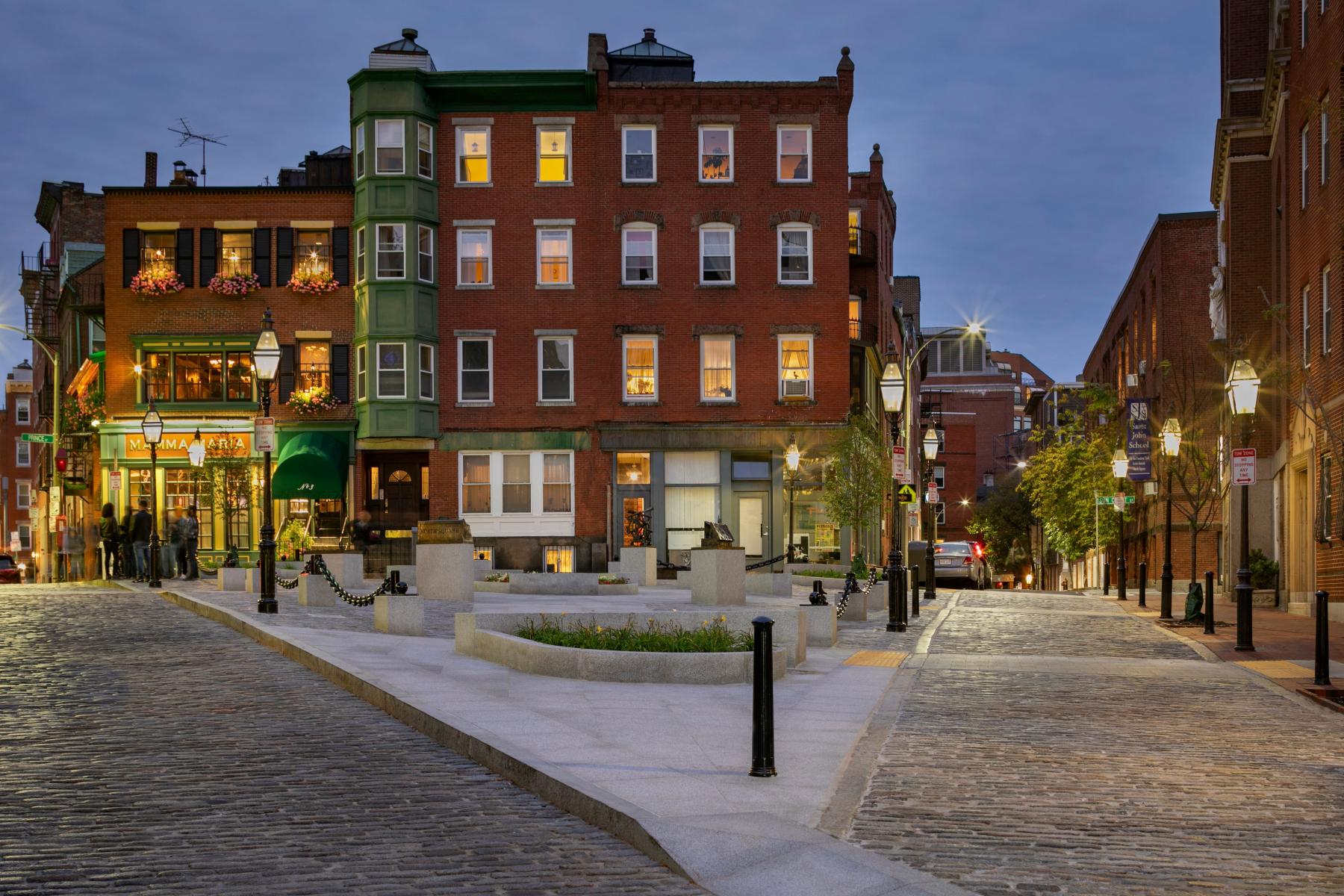 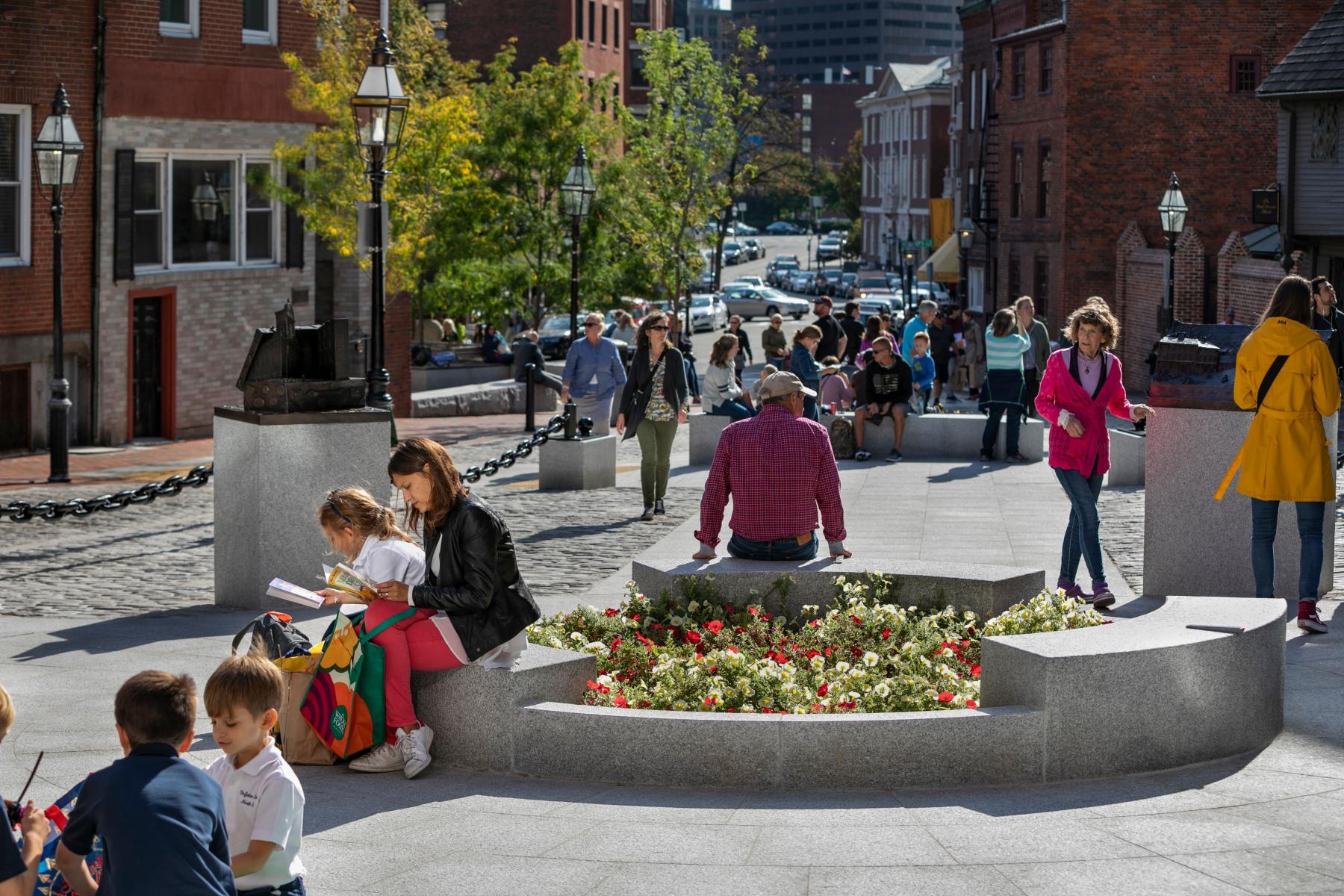 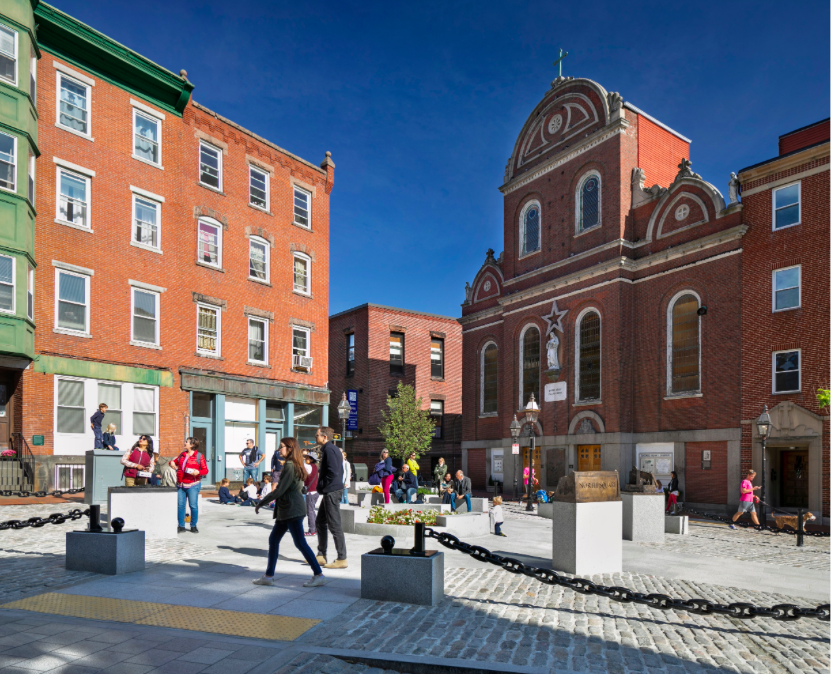 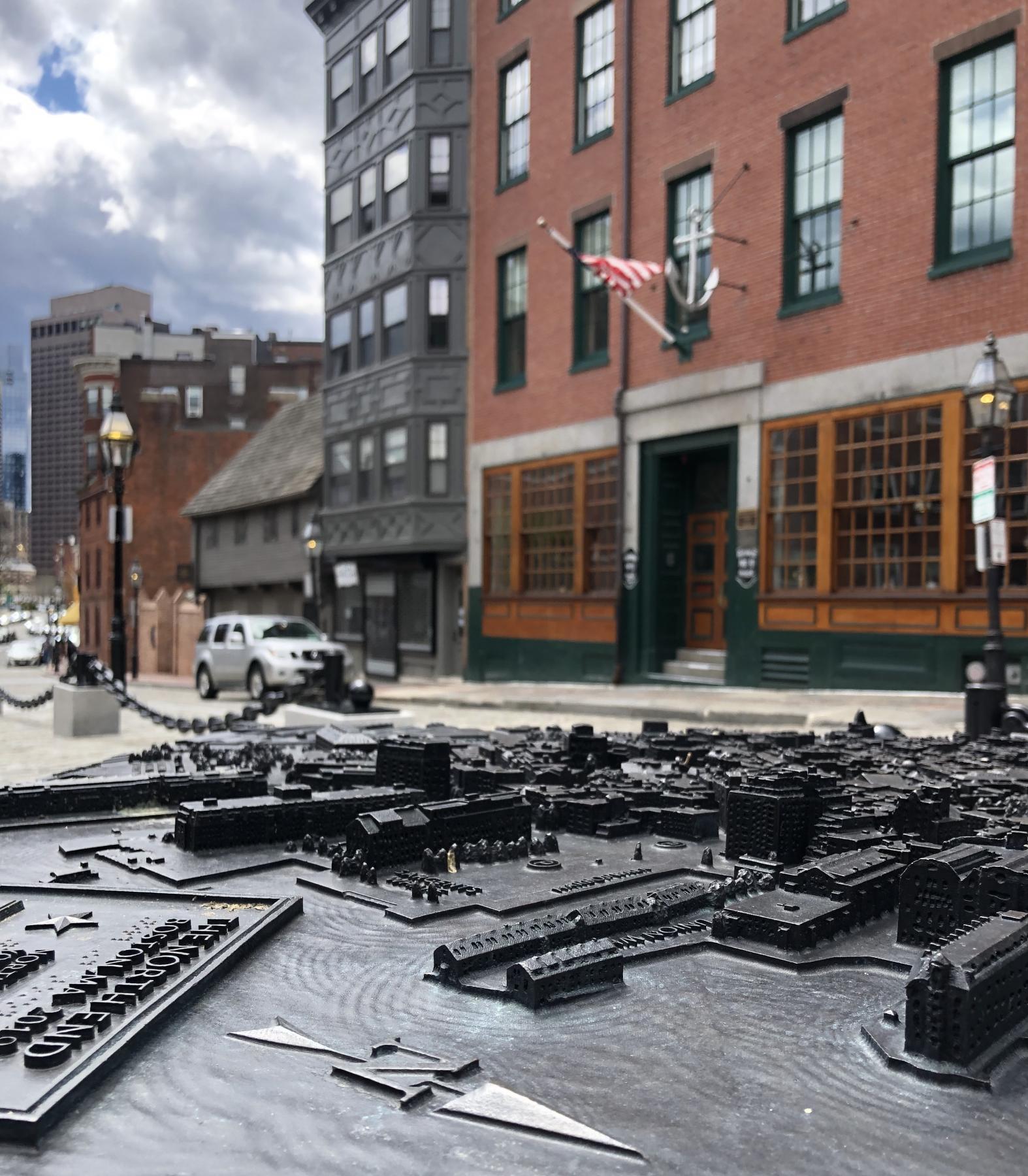 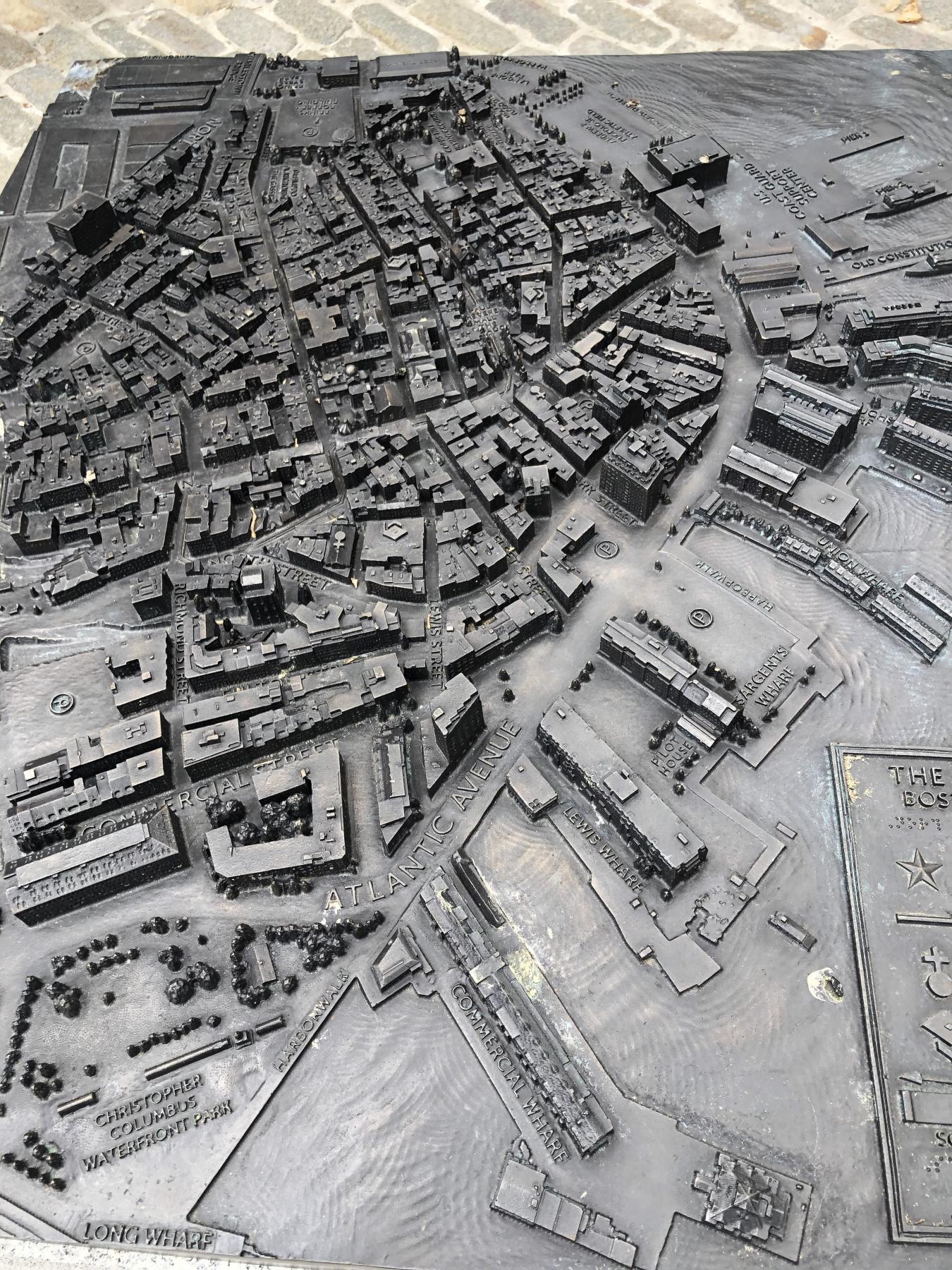 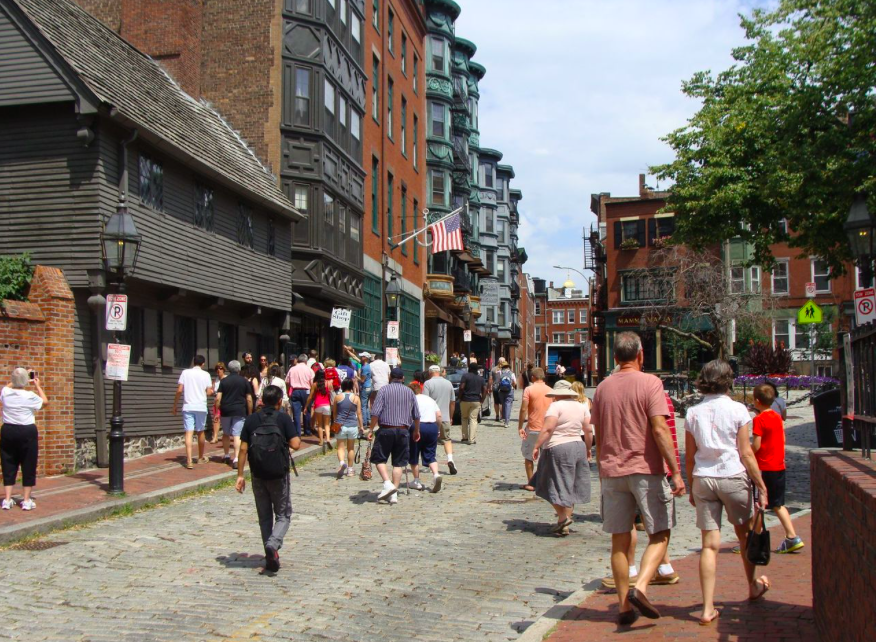 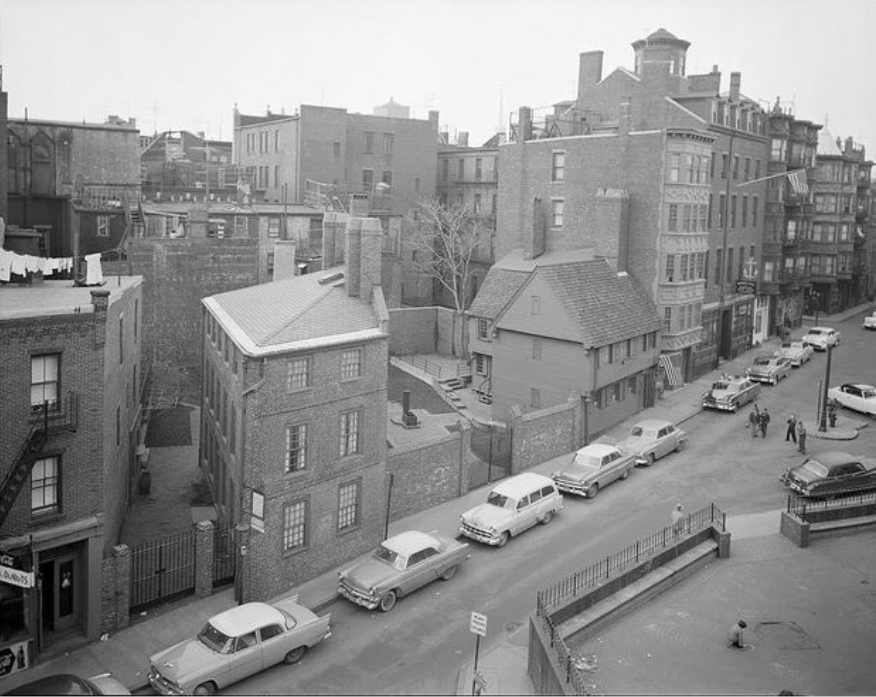 North Square, 1956, photo from Boston Public Library
Thank you to all our corporate members, including: