Mt. Calvary Holy Church, at 9-13, 15, 17 Otisfield Street in the Roxbury neighborhood of Boston represents a diverse cross section of Roxbury history and religious communities. One of the earliest synagogues in Boston was formed by a community of Eastern European Jewish immigrants in a rented space in the North End. In 1894, Congregation Adath Jeshurun, which emerged from the North End congregations, was established in Roxbury by a small Jewish population. Initially, Adath Jeshurun met in a rented space in a building at the corner of Dudley and Washington streets. In 1900, the congregation moved to a synagogue in a three-story chapel at the corner of Blue Hill and Lawrence Avenues, two blocks south of Quincy Street (no longer extant). The presence of a synagogue in Roxbury and Dorchester drew more Jewish residents to the area. Roxbury had about 50 Jewish families in 1903, and the growing population in Roxbury formed a large middle-class community. In 1905–1906, the first major place of worship was constructed, the Congregation Adath Jeshurun, at 397 Blue Hill Avenue. Also in 1906, a small disaffected group, led by Simon Cabelinsky, divided from Adath Jeshurun to form Congregation Sharei Tfila, just a block north of the Adath Jeshurun synagogue on Otisfield Street. The offshoot intended to more strictly follow Talmudic, or Orthodox, law as it seems that the group felt that Adath Jeshurun was not adhering as strictly to Orthodox tenets. Initially, Sharei Tfila was an example of a shtibel, or a small congregation located typically in a converted house; in this case a house at 15 Otisfield Street. Cabelinsky (1866–1939), an immigrant from Janova, Lithuania, came to Boston in 1890 with his wife Ida. By 1910, the pair were living on Intervale Street, just one street to the south, where they resided for the rest of their lives.

The three lots that make up this site were initially occupied by wood-frame houses, which were demolished in order to permit the construction of the brick Congregation Sharei Tfila (later Mt. Calvary Holy Church). In 1915, a brick synagogue was constructed on the east portion of the property, replacing the original frame house that the congregation
met in. The synagogue was designed by A.J. Carpenter and built by C.H. Waldman. In the 1921, Cabelinsky funded the construction of the first Hebrew school in Roxbury, the Roxbury Hebrew School, 9–13 Otisfield Street, on the west side of the property. The school was also designed by Carpenter. A continuous street presence and a wide internal
courtyard were formed by the construction of a one-story gated brick wall between the street elevations of the synagogue and school.

In 1959, 9–13 Otisfield Street was occupied by the Roxbury Hebrew School, the Maimonides School (now in Brookline), and the United Kosher Butcher Association, and the synagogue was still in use. However, the complexion of the neighborhood was shifting away from being predominantly Jewish. During World War II, many Roxbury Jews left the neighborhood, preferring to move to single-family or two-family houses on larger lots in West Roxbury or Mattapan, while others moved to Brookline and Newton. In the fall of 1961, Congregation Sharei Tfila disbanded, likely due to dwindling numbers, and sold the synagogue and school to the Mt. Calvary Holy Church, an African-American Pentecostal Church.

Mt. Calvary Holy Church was founded in Winston-Salem, North Carolina in 1927 by Bishop Blumfield Johnson when Johnson left the United Holy Church of America along with 200 followers. Johnson next led a revival in Huntington, Long Island, New York, which resulted in a branch of the Mt. Calvary church being founded there as well. In 1929, Johnson and his followers traveled to Boston, where they chartered the Mt. Calvary Holy Church on July 27, 1929. In 1960, the headquarters moved to Boston, following a fire at the headquarters in Buffalo, NY. National Mt. Calvary Holy Church Convocations were held in Boston until an international headquarters was established in Washington, D.C. in 1991. Through the late twentieth and early twenty-first century, the buildings were used as a church and soup kitchen, as well as providing day treatment for mentally ill patients. In 1980, Bishop Nellie Yarborough of the Mt. Calvary Holy Church was one of several African-American ministers in Boston calling for peaceful protests in the wake of the killing of Gerald White in Codman Square in Dorchester. Bishop Yarborough was also responsible for organizing the soup kitchen and other public outreach programs in the neighborhood.

More of the history of the site can be found in the attached Inventory form, below.

The Alliance believes that historic significance should be determined by the people who use, remember, and treasure places. We support the designation of this site as a local Landmark so that it can receive the recognition and protection it deserves and we support the congregation’s efforts to revitalize the site. Through this process, important stories about the site’s past have emerged and with its preservation, Bostonians will maintain that tangible connection to its history.

Alliance staff attends a virtual Boston Landmarks Commission where a petition to accept the property for further study as a Boston Landmark is presented, discussed, and voted on. The Alliance speaks in support of the designation. The Commission unanimously votes in favor of accepting the petition. The next step requires the creation of a study report that will be presented to the Commission and voted on at a future meeting. The property is considered a “Pending Landmark” until that vote.

Alliance staff maintains a dialogue with members of the congregation’s advisory boards to discuss the Landmarking process and future of the site. 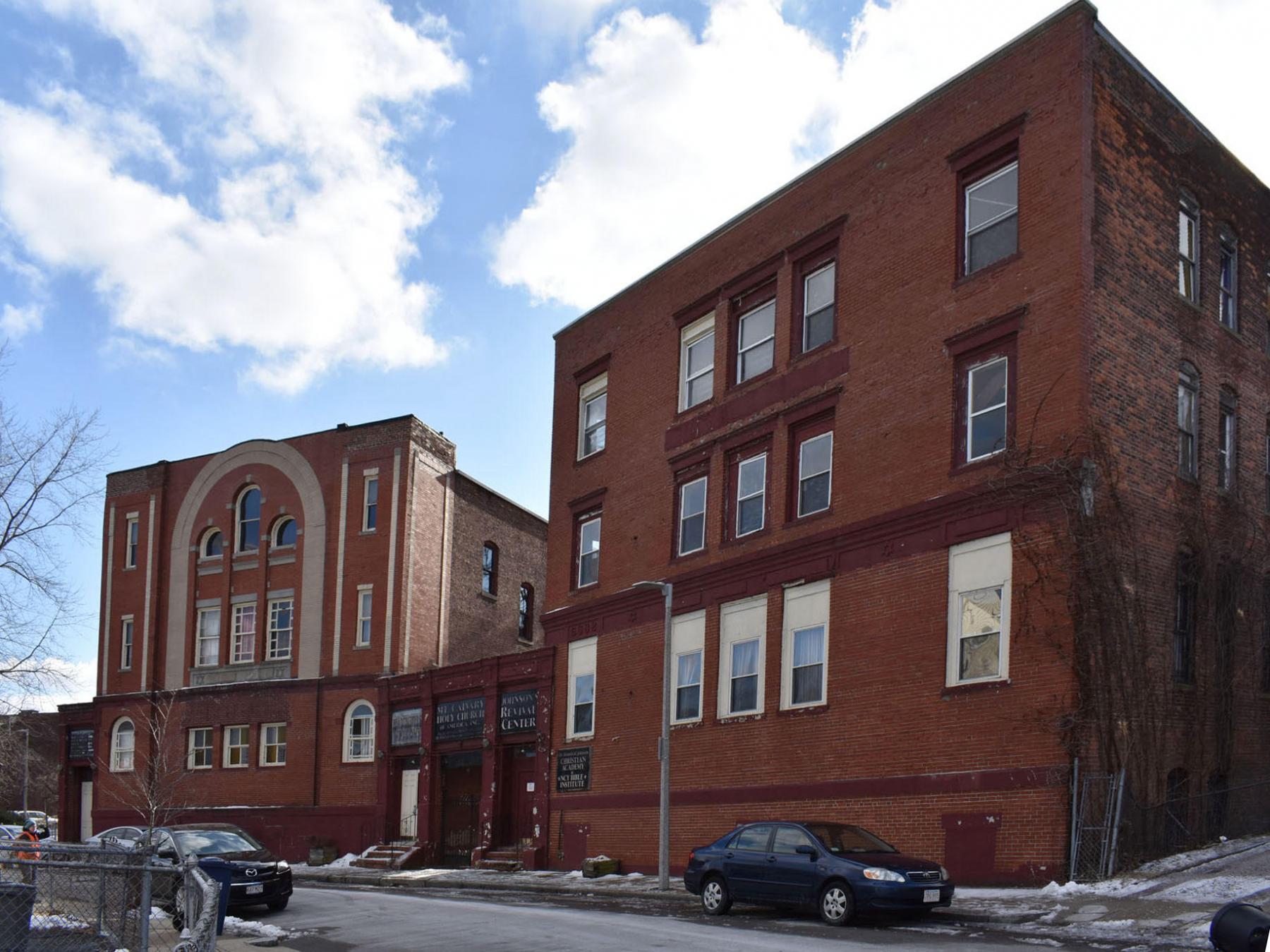 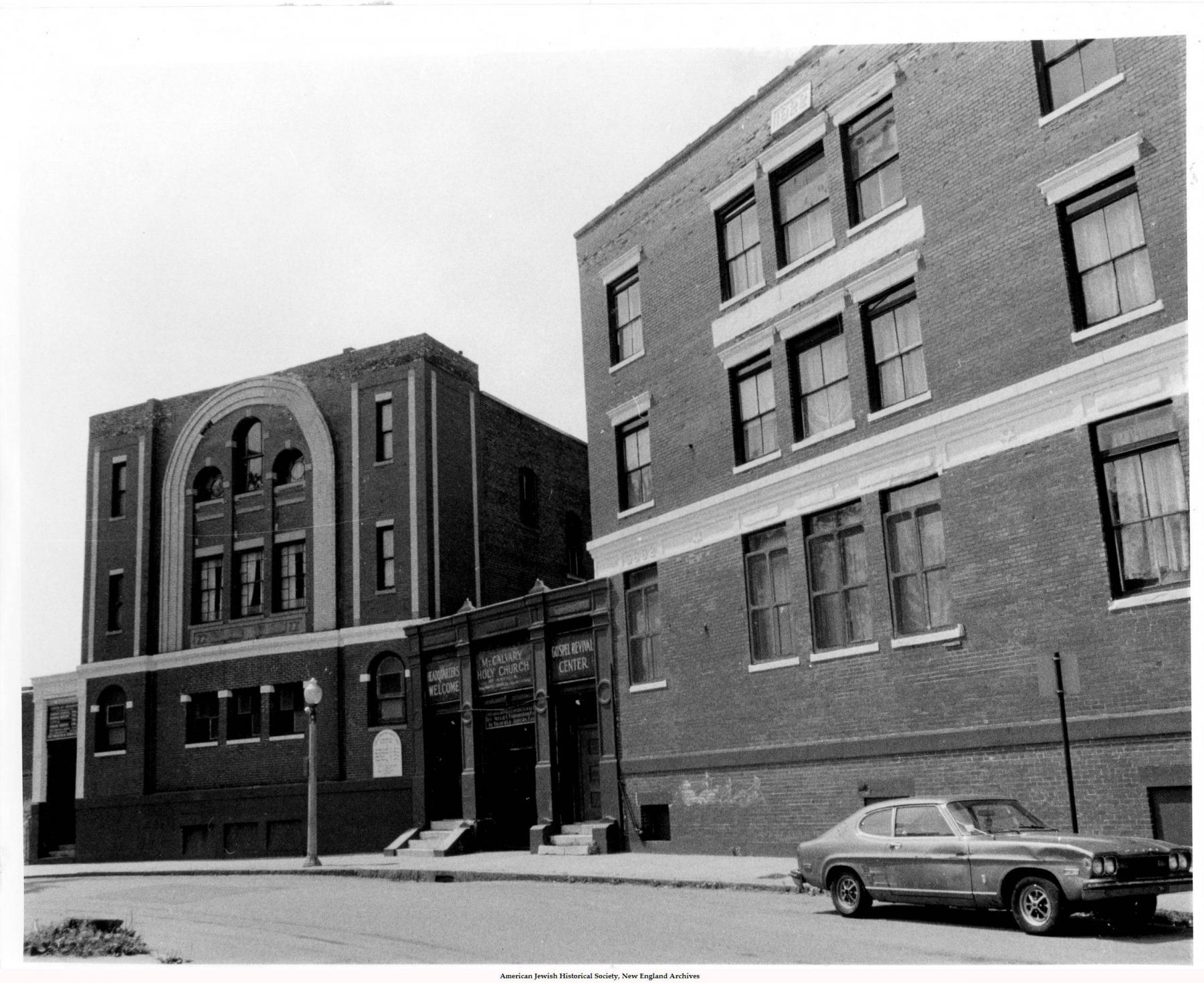 ca. 1980, Collections of the American Jewish Historical Society
Thank you to all our corporate members, including: