Originally opened in 1928, the Sears Roebuck & Co. warehouse and distribution center was a retail powerhouse serving all of New England and New York for sixty years. With its striking 12-story ziggurat tower and industrial-style architecture, the nearly one million square foot building is an imposing feature of the Fenway neighborhood. Two rail spurs once connected the building to the larger railroad system to facilitate deliveries of orders from the popular Sears catalog. The building was the last of ten Sears mail-order plants designed by George C. Nimmons but was abandoned by Sears in 1988. With help from the Boston Preservation Alliance, this prominent limestone and brick building was designated a Boston Landmark in 1989, protecting it from demolition, and was added to the National Register of Historic Places in 1991.

When Samuels & Associates acquired 401 Park in 2011 they believed the site would benefit from a repositioning that better reflected the changing trends of the neighborhood. What had functioned as underutilized offices with ground-floor retail and cinema would be rehabilitated into a dynamic 24-7 destination to maximize the full potential of the historic building and site. The 401 Park project had three goals: honor the history of the neighborhood cornerstone; become a magnetic work/play hub to engage workers, residents, and visitors; and connect the Fenway and Longwood Medical neighborhoods to create a welcoming new public realm. Increased porosity into the building at the pedestrian level now encourages greater opportunities for interaction. A former surface parking lot, converted into a one-acre park, creates a four-season gathering venue. Original interior features are revealed and enhanced to highlight the architecture of the building. Moments from the building’s past are scattered throughout the spaces- a linotype machine, like ones once used to print the Sears catalog, and household items that would have been available in the catalog- remind guests of the history of the building.

401 Park stands tall as a testament to the value of adaptive reuse projects. When one life of a building comes to an end, a new life emerges. Samuels & Associates not only found a variety of creative new uses for this site, they enhanced its architectural presence and featured its history in its rebirth.

“The best places in the city are where new and old come together, creating vibrancy and preserving Boston’s dynamic tapestry of architectural styles and materials,” says Alison Frazee, Executive Director. “It’s important for projects like 401 Park that anchor changing neighborhoods be prioritized to maintain that important character, sense of place, and identity that make each of Boston’s neighborhoods unique.”

Built in 1928, the Sears Roebuck building is an important and rare example of Art Deco commercial building in Boston. It was the last of ten Sears and Roebuck mail order plants designed by George C. Nimmons. The opening of the Sears retail store caused such excitement in Boston that the city provided extra streetcars to handle the crowds.

By the 1960s, an economic downturn caused the Fenway to decline; in the 1980s, Sears no longer had need for this warehouse. The building sat vacant for years, causing a major void in the fabric of the neighborhood and facing demolition several times.

The former Sears Roebuck and Company Building was designated as a Boston Landmark in 1989. However, the building faced having its landmark status rescinded in 1995 after several development proposals failed and many people believed that the restoration of the building was financially infeasible.

The Alliance actively advocated for a preservation-friendly development alternative for this site. Listing the building on the National Register of Historic Places permitted developers to take advantage State and Federal Historic Rehabilitation Tax Credits. In 1998, a plan to restore the building and convert the interior into retail and office space was devised and implemented by the Abbey Group with architects Bruner/Cott & Associates. “The challenge of the project—and eventual solution to the building’s successful historic rehabilitation—was to use the old elements of the Sears building, now on the National Register, as the inspiration for the new environment: metamorphosing a 1929 warehouse into a 21st century office center,” said the architects at Bruner/Cott & Associates.

It was a parking lot. Now it’s a park, and the ‘center of gravity’ in reimagined Fenway Neighborhood. (2019) 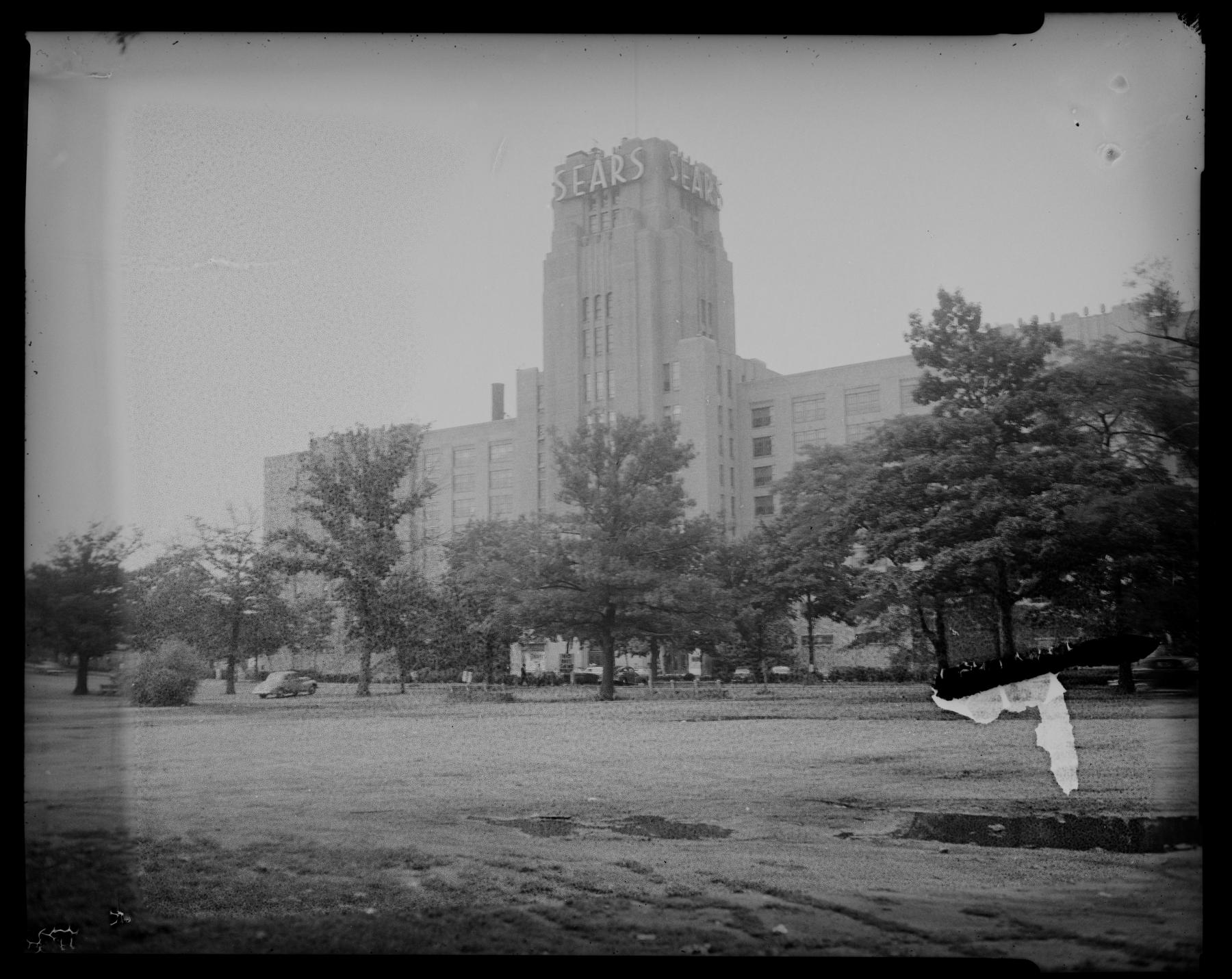 The 1928 Sears Roebuck building is an important and rare example of an Art Deco commercial building in Boston. Image from 1954 via the Digital Commonwealth. 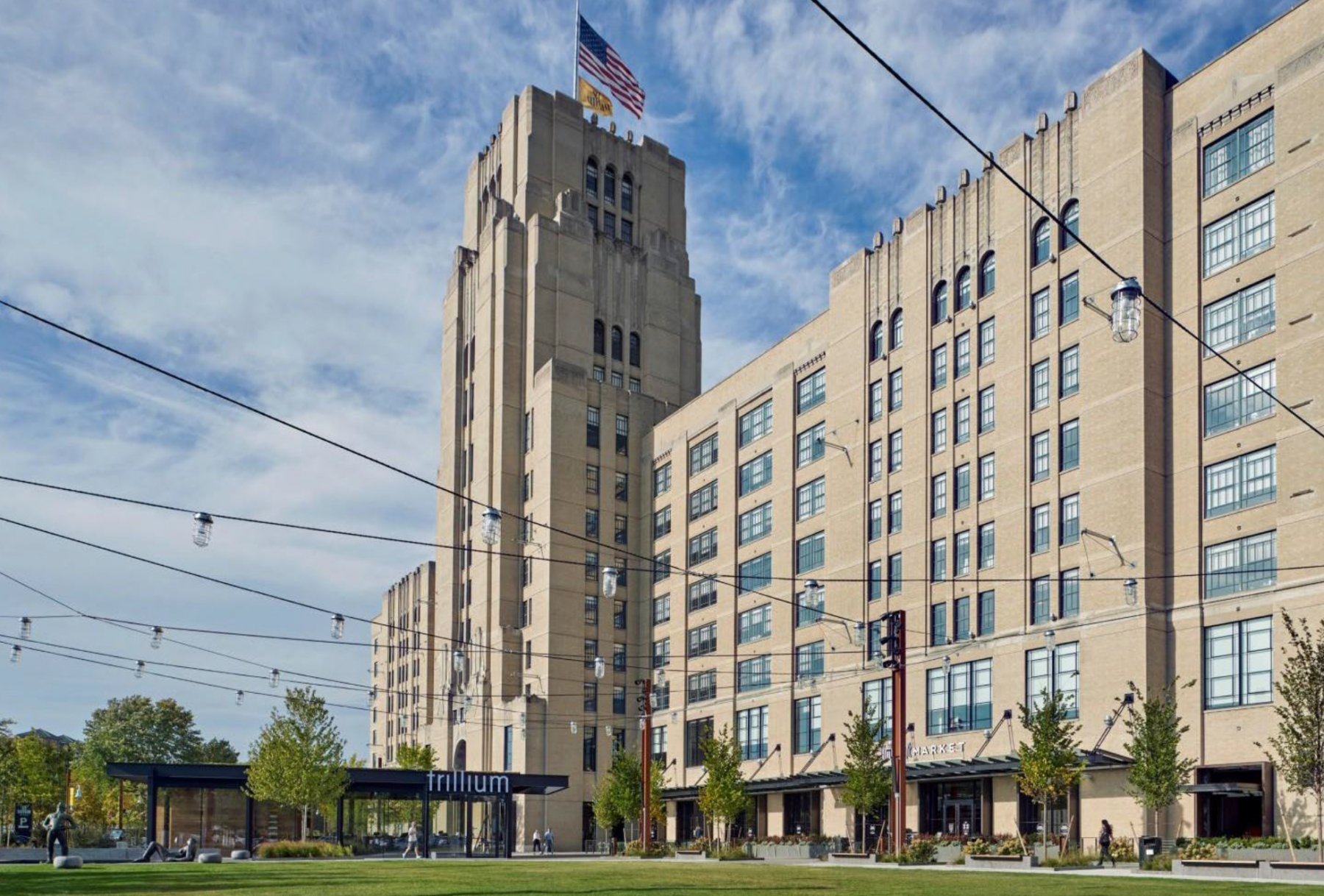 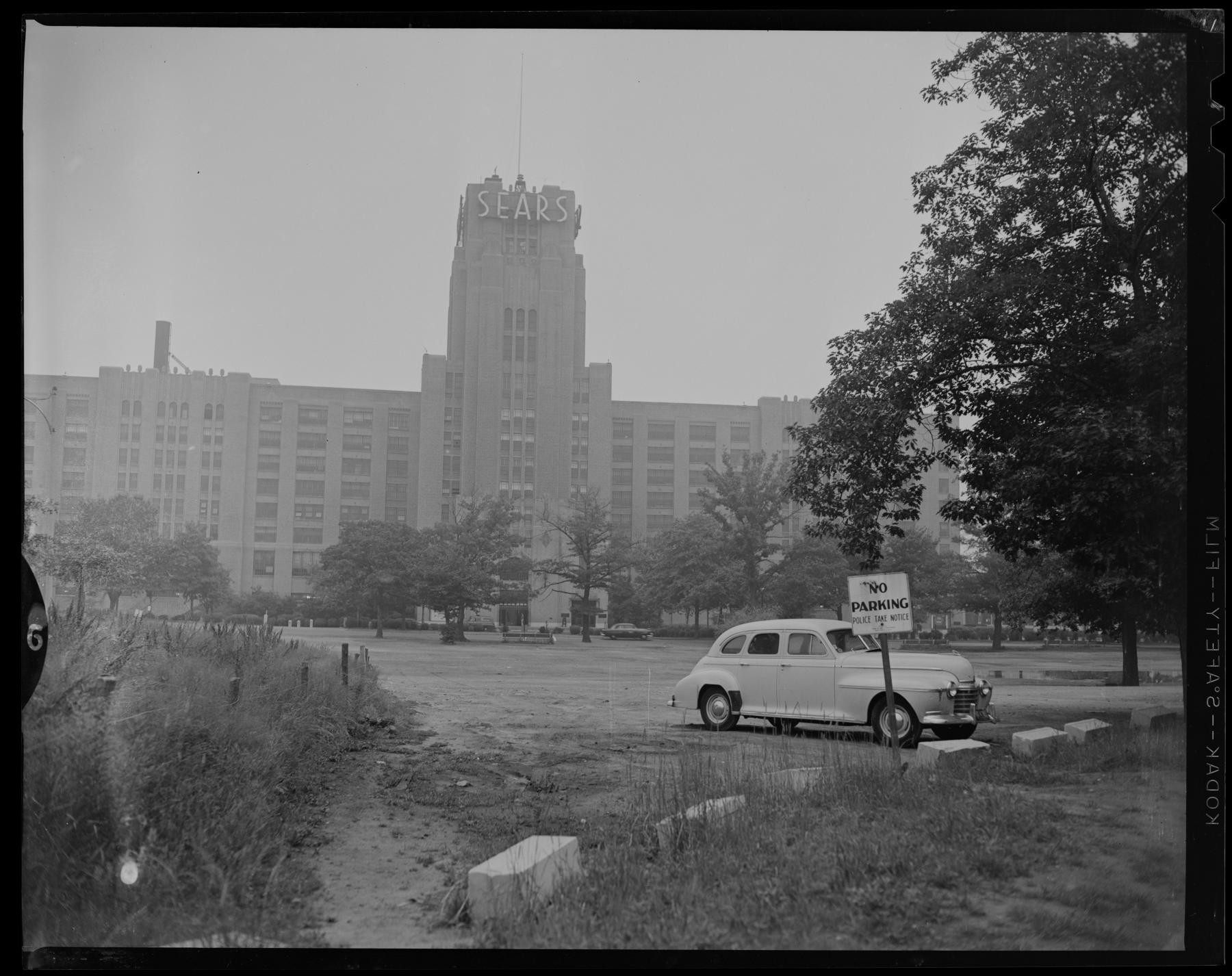 No Parking. 1954 via the Digital Commonwealth. 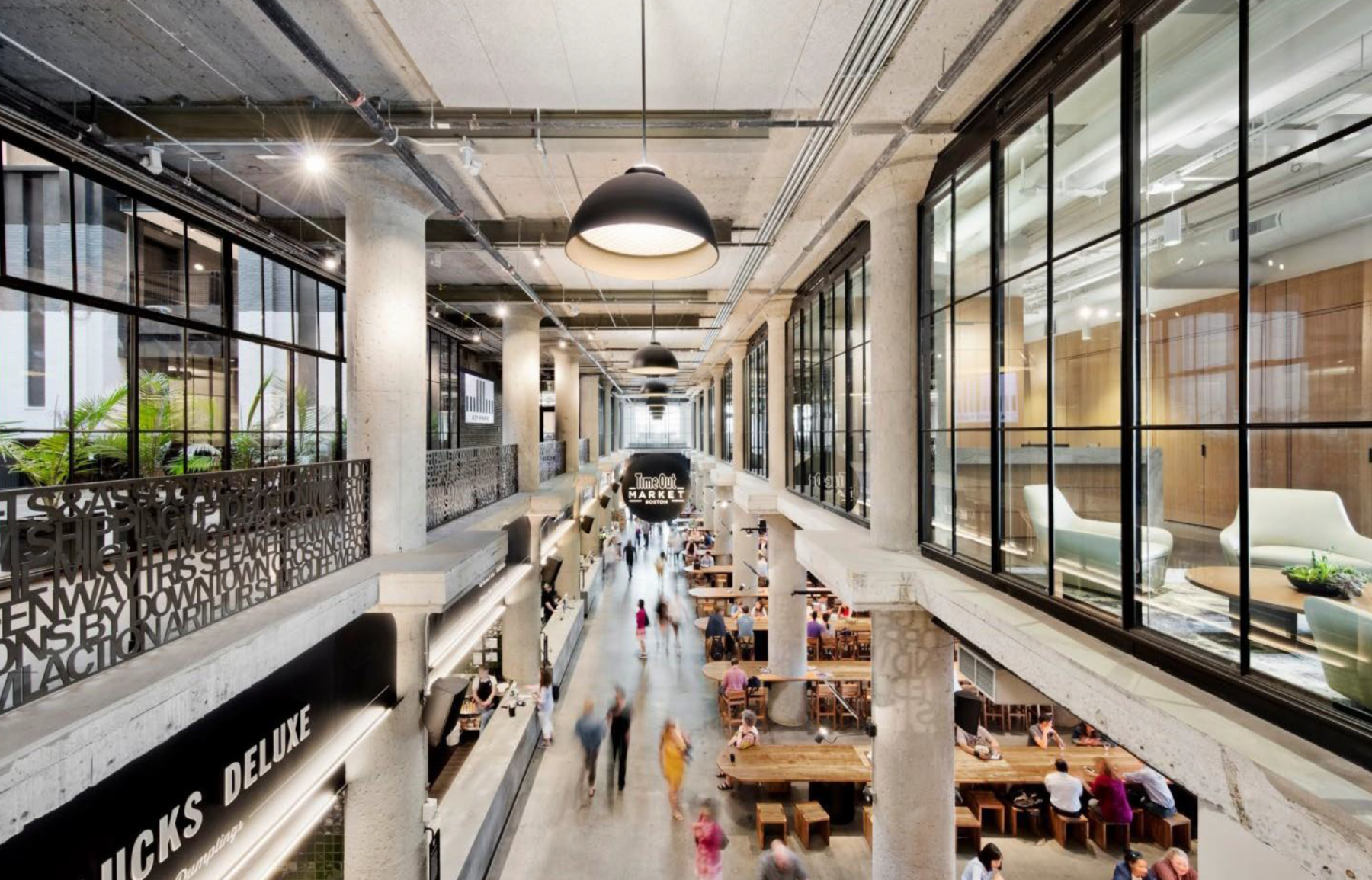 401 Park, After. Photo by Robert Benson. 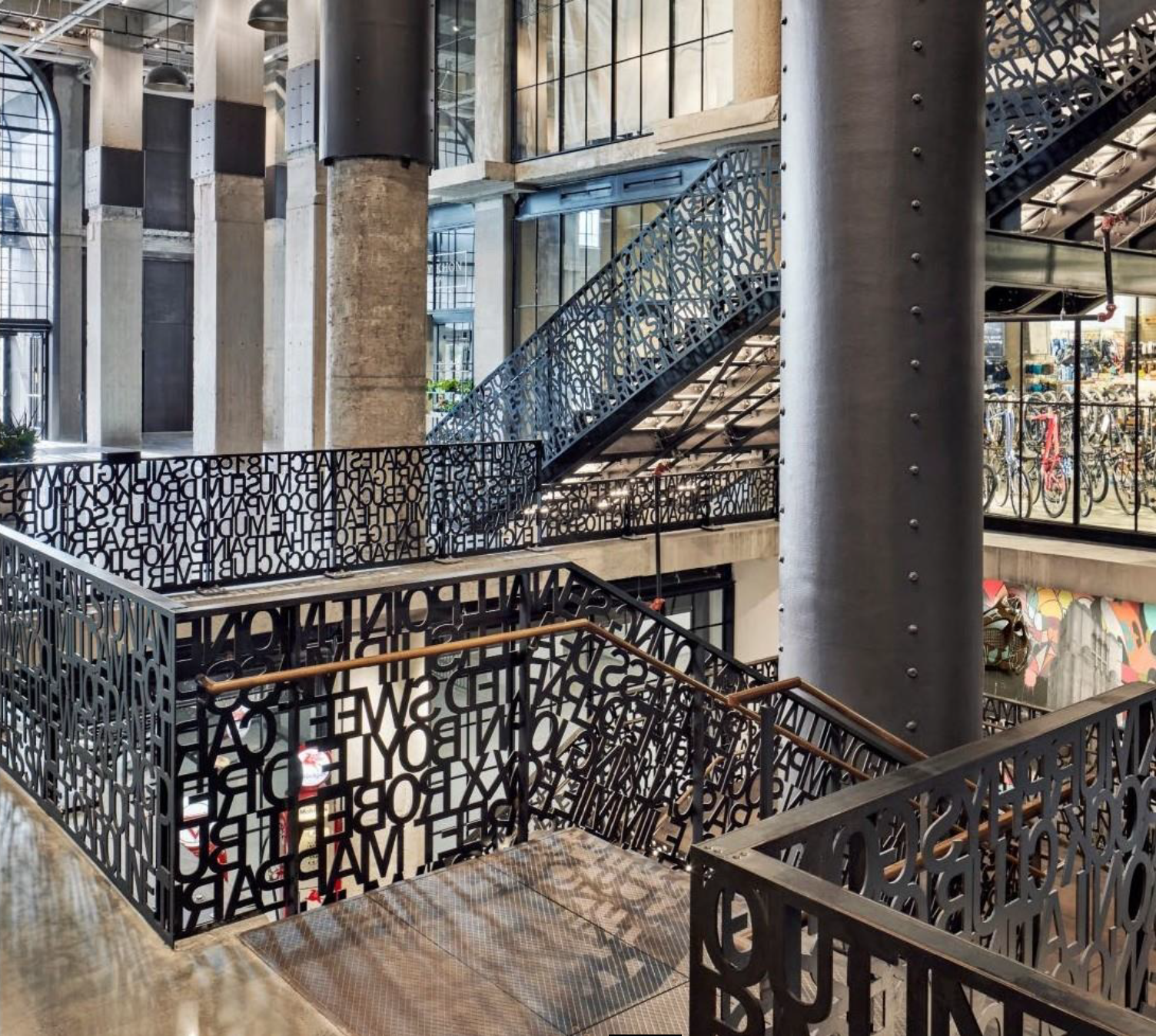 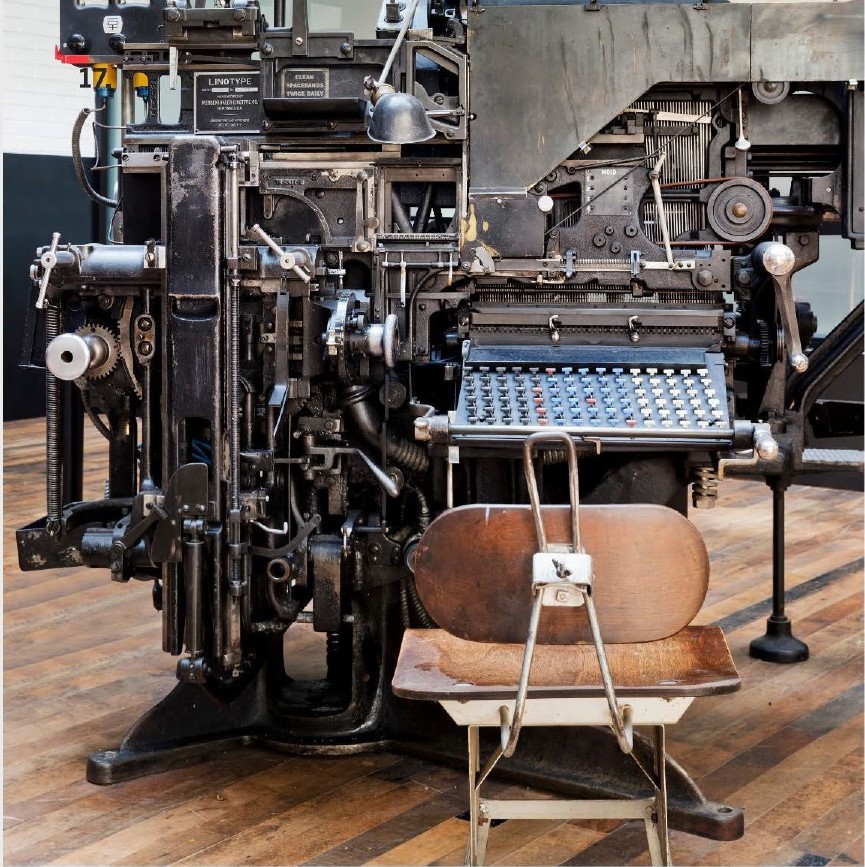 A linotype machine like one used to print the Sears catalog
Thank you to all our corporate members, including: